Another illusion costume, this time with some Saint Patrick's Day theme!

Equipment
First step was to create the field to support the lower half of the leprechaun.

I cut out a hole in the middle of the board that was a little smaller than my waist. It was a tight squeeze to get in and out of the board, but this way the board could rest on my hips. 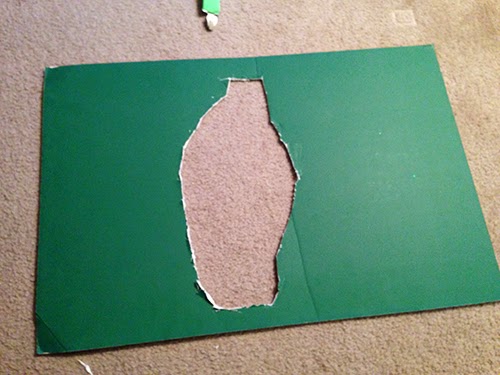 Because there were only a few inches between myself and the cardboard, I used strips of cardboard to reinforce the board.


Next, I wrapped the entire table in duck tape. This helps to keep the piece water-proof; you never know what kind of weather you'll get for race day in Michigan!

I purchased a yard of Saint Patrick's Day cloth from a fabric and spread it out on the floor with the back of the pattern facing the ceiling. I centered the foam board over the cloth with the long edges in the front and the back.

To open the now-fabric-covered hole, I cut the cloth into strips and duck taped down to the bottom of the board.

Once I done with the opening, I flipped the board back over. I ran tacky glue along the edges of the board and pressed down to secure the fabric.


Two dowels, one on each long side, were added to help support the table. I found the pot o'gold and the plastic mug were enough to buckle the table a bit and make it droop.

Now for the pot o' gold!

The pot was decorated with the word "LUCKY" and in shamrocks with green and gold glitter pens. 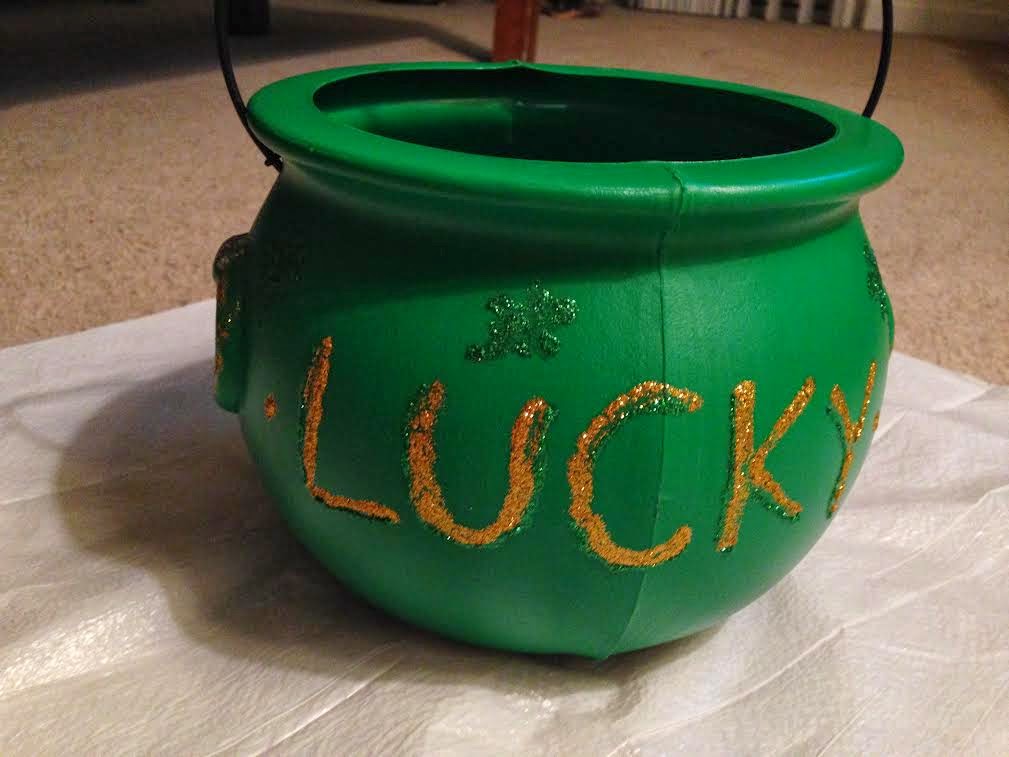 For the top of the pot, I cut out a circular piece of cardboard that was the same size as the rim of the plastic pot. I covered it with duck tape, again for weather reasons. 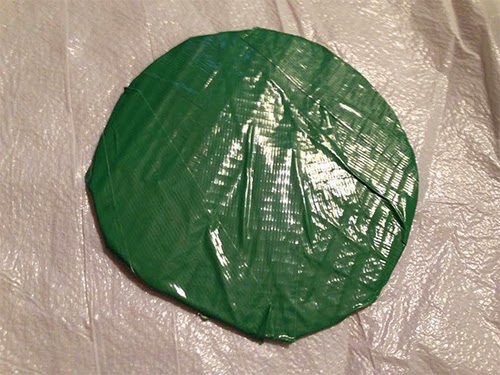 This piece was covered in gold coins that I picked up from the dollar store, secured with tacky glue.

To secure to the table, I used tacky glue and a couple of parachute pins. The glue might have been enough, but I really didn't want to lose the pot 'o gold!

Once the pot was secured, I filled the pot with polyfill and glued the top piece covered with coins to the top of the pot.

Now for the legs! The pants and shoes came from the thrift store, the socks from a grocery store. 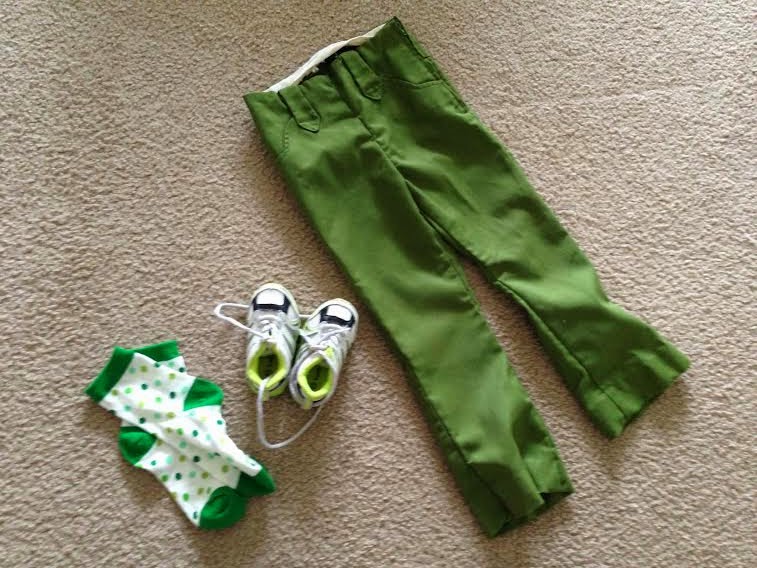 I was lucky - I found kids' running shoes in green!

The shoes were glued to the edge of the foam board. The pants were glued right near the opening, and were also sewn to the table (had to use a big needle for that!) 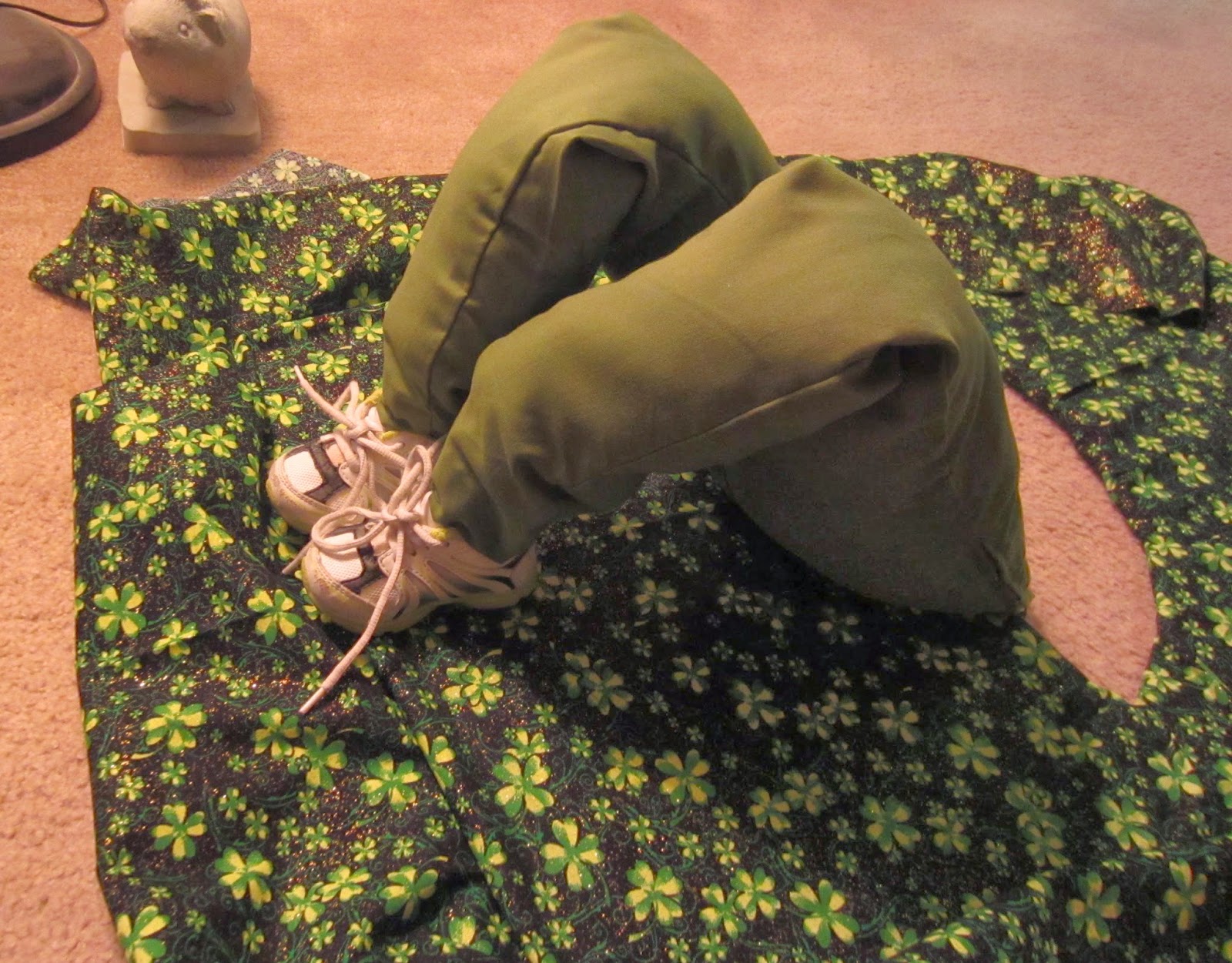 To decorate the rest of the open space, I added a garland to the back of the table. A green plastic mug was added to the front, and gold coin were scattered around the pot o'gold and along the edges. 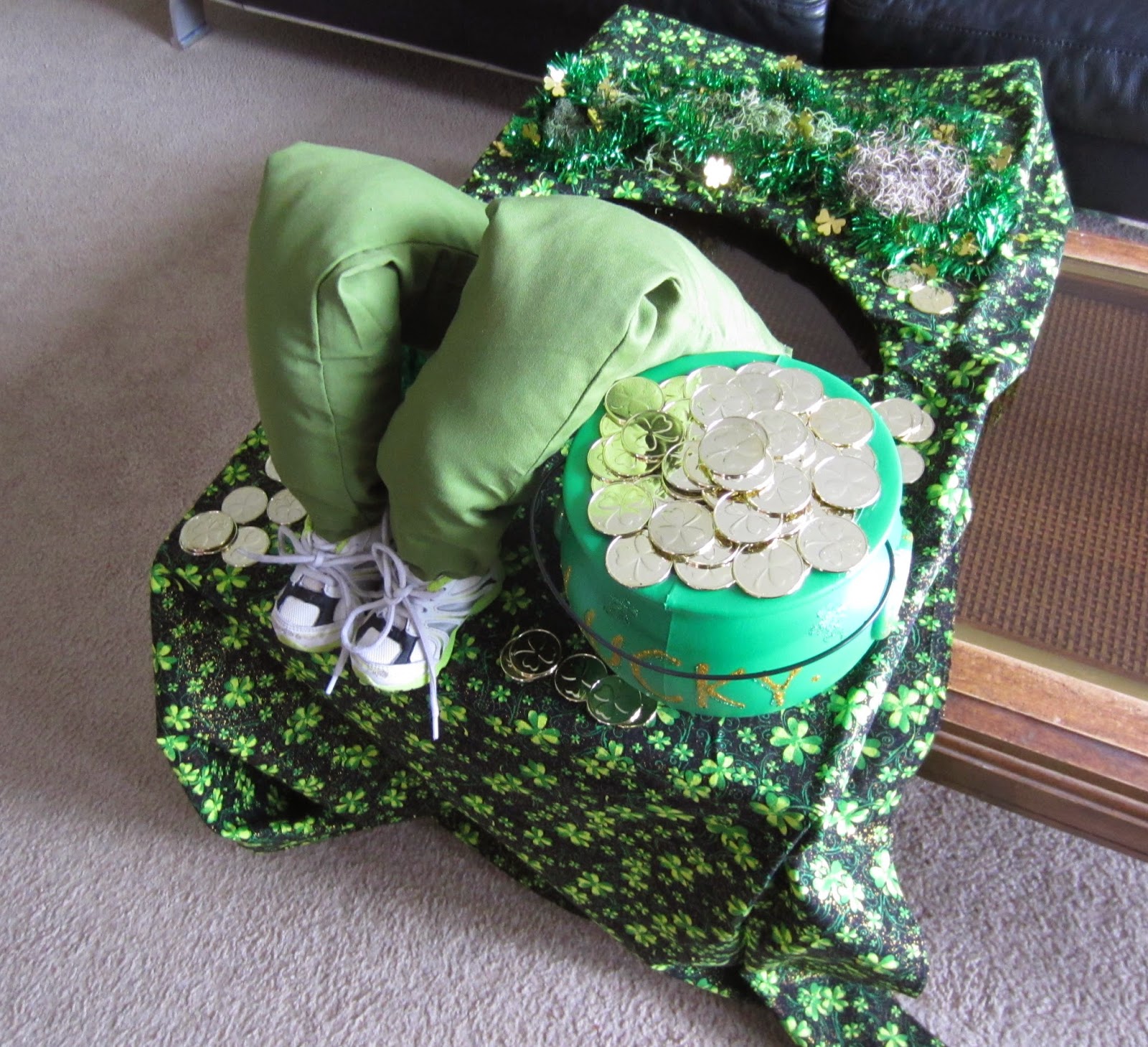 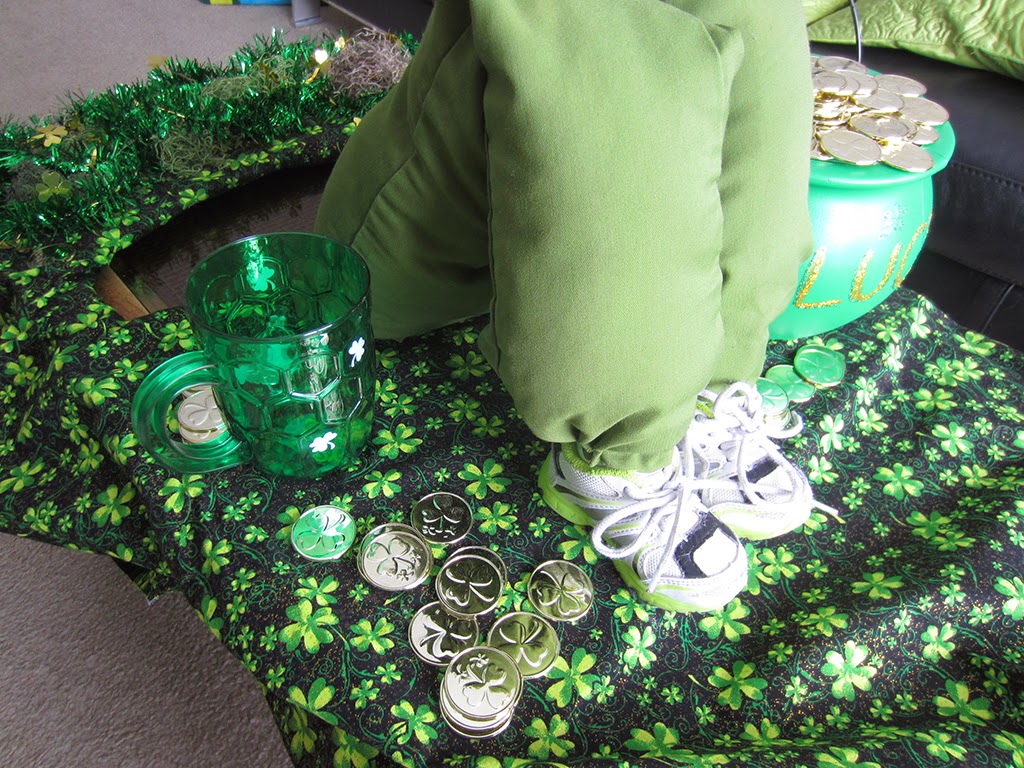 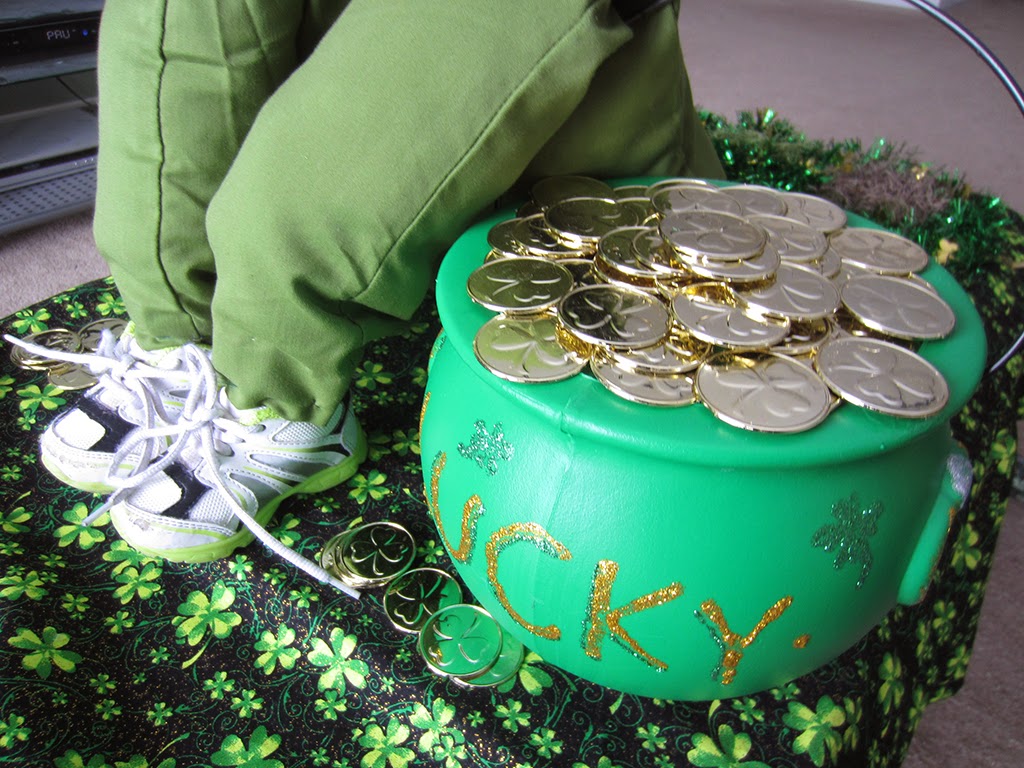 For the wearable pieces of the costume, I had a wig, a shamrock headband for one race and a tiny hat (I love tiny hats) for the other, a bowtie, shamrock gloves, shamrock socks, and of course the leprechaun jacket.